I recently located two historic live oaks that are in the 30-foot-plus girth size and have never been registered with the Live Oak Society.  This blog entry focuses on the one whose history I was able to partially piece together.

The first oak, which I’ll call the “Jefferson College Oak” for the purpose of this blog, has a circumference of 32 feet 1 inch, and is located on the upriver property line of the Manresa House of Retreats, located in Convent, Louisiana, on the east bank Mississippi River road (Hwy. 44). 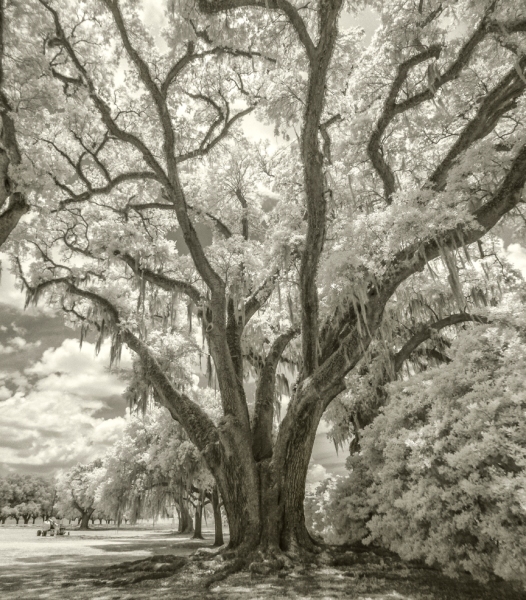 Convent, originally named Baron when it was first settled between 1722 and 1729, has been the parish seat of St. James the Baptist Parish since 1869. It’s an old historic town that today has only a few hundred residents.

Manresa was originally founded as the “College of Jefferson” in 1830 by a group of wealthy French Creoles, headed by Louisiana’s ninth governor, Andre B. Roman.  These founders wished to provide an intellectual foundation for their sons and heirs and so the College of Jefferson reflected their views and values toward architecture, gentlemanly instruction, and secular liberal arts studies. These wealthy Creole founders’ views mirrored those found in late eighteenth- and early nineteenth-century Paris.* They were not the same views as those in the American colonies of the northeast. In the words of the founders, they wished to establish an institution of higher learning “where our children will find the means of completing their course of studies without leaving their native land.”

Jefferson College was chartered in 1831 and opened its doors in February of 1834 with 62 students, comprised primarily of the sons of wealthy Louisiana planters. In 1842, the main building was destroyed by fire and though rebuilt, the college never reached its potential. It closed in 1848 and the buildings were sold at a sheriff’s sale. It reopened again briefly between 1853 and 1856 as “Louisiana College.” Then, in 1860, when on the verge of collapse, it was purchased and saved by Louisiana’s wealthiest sugarcane planter, Valcour Aime, who had supported the school from its beginnings.

Aime had a chapel added on the downriver side of the main building, supposedly to honor his only son, Gabriel, who had died of yellow fever in 1854. Between 1862 and 1864, the school was occupied by Federal troops, and in 1864, Aime transferred the property to the Marist Fathers of France, who reopened and renamed the school, “St. Mary’s College of Jefferson” that same year. It operated until 1927. Then, in 1931, the Jesuit Fathers of New Orleans purchased the college and renamed it Manresa House of Retreats, a non-denominational Jesuit retreat center for men.

*Much of the information about Jefferson College referred to here was obtained from the website, “America’s Lost Colleges” http://www.lostcolleges.com/jefferson-college