The Seven Brothers Oak is located south of Washington, Louisiana, on Hwy. 182 about a mile out of downtown Washington – at the intersection of Hwy 182 and Par Road 5-25.  The large live oak is usually well-maintained in the open space fronting the Highway.

The tree’s girth (circumference) was reported in two sections by Dr. Stephens in 1934 (27’3” and 26’4”), due to the configuration of the tree’s multi-trunk system.  One section of the system (the larger measurement) had a severed trunk.

History:  There is more than one story about this particular tree (or group of trees)[1].  On our expedition, the person who currently maintains the tree and grounds of the Lastrapes homestead explained that it had been planted and named for the seven Lastrapes brothers who had left home to fight in the Civil War.  In another variation of the story, described in Ethelyn Orso’s Louisiana Live Oak Lore, the birth of his seventh son prompted Jean Henri Lastrapes to request that seven oaks be planted; the workers arrived late in the day with the seedlings and temporarily put them in one container (or hole).  The business of the days that followed in the cotton fields distracted the workers from ever completing the planting task—and thus the trees grew together, sharing the close proximity of their original planting site.

Seven Brothers Oak, view from the southeast side

In a recent email from Paul Lastrapes, he confirmed my suspicions that, “the version of the story that the tree was named for 7 brothers who went to the Civil War is not only incorrect, but it’s impossible. The tree was planted many decades before the war AND while it is true that some of Jean Henri’s descendants served, 7 from the same family? No. The genealogy tree back to Jean Henri does not support this version in any way. ”

Photo Notes: The skies were alternately sunny and cloudy, as the afternoon thunderheads passed by; so Bill had some wonderful light to photograph the various aspects of the old oak in black & white with his view camera, while Cyndi photographed the nearby cottage.  Although timeworn and no longer in use, the structure seemed content to remain as it was, in the company of its venerable friend.

Cyndi’s Nature Notes:  A frequent visitor to the live oak, a golden silk orb-weaver spider (Nephilia clavipes), also known as the “banana spider”, had created a web amongst the lower branches of the tree. 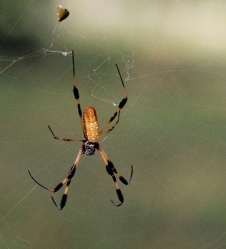