In 2009, a 150-year-old live oak tree named “Mr. Al” was saved from certain death by a group of local citizens in the New Iberia area. 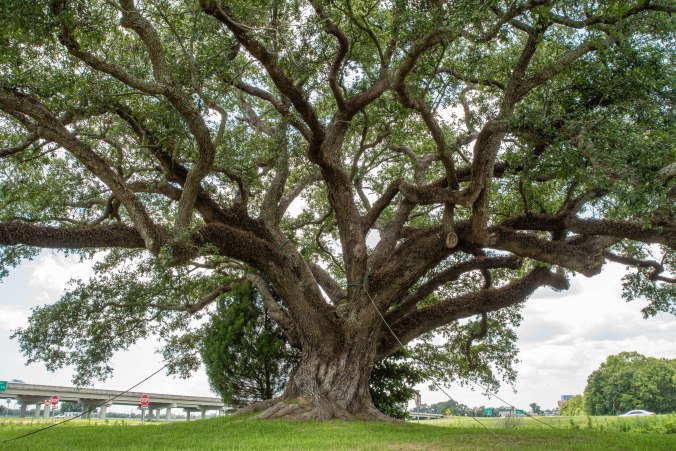 The story was published in several local newspapers, though, none of the reporters seemed to get all of the backstory correct. This post is intended to set the record straight on how the old oak was saved, who was involved, and what it means for other communities and individuals attempting to save a historical oak in their town or city.

Mr. Al was growing alongside LA Hwy. 90 (the old Spanish Trail) near New Iberia, Louisiana, next to property owned by Kelli Peltier. Peltier’s family had nicknamed the oak “Mr. Al” after her grandfather who grew up with the tree. The oak had a circumference of 20 feet 7 inches and a canopy spread of 104 feet in 2009. When Peltier learned that the oak was slated for removal by the state Department of Transportation and Development (DOTD) as part of a frontage road construction project, she began a search for help to save Mr. Al.  She found that help through Susan Hester Edmunds, then president of the Optimist Club of New Iberia.

If you’re not from Louisiana, New Iberia is located on Bayou Teche in the heart of Louisiana’s “Cajun Country.”  It’s known locally as the City of Live Oaks and has several 100-plus-year-old specimens of Southern live oaks (Quercus virginiana) growing in and about the town.  New Iberia is also known as the location for several mystery novels by writer James Lee Burke.

According to Edmunds, the Optimist Club usually plants a tree every year as part of its Arbor Day celebration. When she told the group of the plight of Mr. Al, they decided, instead of planting a tree, to pass a resolution in support of saving a venerable tree.  Susan Edmunds worked closely with Kellie Peltier to create an email and letter-writing campaign to solicit wider support. They began a petition and gathered signatures appealing to the DOTD and state officials to spare Mr. Al from removal. The DOTD was sympathetic but was limited in its choices by rights of way laws and strict rules about future expansion plans to convert state Hwy. 90 into  Interstate Highway 49.

Peltier gained further support from the Live Oak Society who reached out to former Louisiana governor, Mike Foster, who lives near New Iberia in Franklin.  The DOTD engineers and administrators finally devised a plan to save Mr. Al.  According to a February 13, 2009, letter from Gordon E. Nelson, Assistant Secretary of Operations for the DOTD to the New Iberia Optimist Club, the state proposed to construct a cul-de-sac at each end of the service road and leave the old oak growing in the middle.

Unfortunately, this first option didn’t work out and the DOTD came up with a plan “B.” They hired a company that specialized in transplanting large trees. In May of 2011, the large tree movers dug up Mr. Al along with its 400-ton root ball and moved it a mile and a half to the intersection of Highway 90 and Weeks Island Road. (you can see photographs of the move here.) They also put in place a plan to provide transplant care for the tree for several years to ensure the tree survived the move. Mr. Al’s new home was outfitted with an on-site well and irrigation system to water the old tree twice a day and guide wires to help stabilize the huge oak until it reestablished its root system.  Following its transplanting, Mr. Al received regular inspections by local arborist, Jim Foret, who carefully watched the tree’s rate of seasonal leaf shed and growth to ensure it settled well into its new home.

It’s now been more than nine years since Mr. Al was moved and the oak appears to be healthy and strong. According to Foret, the tree has root growth far outside the original root ball and, if there are no other significant natural events, such as severe wind storms or lightning, Mr. Al could live another 150 years in his new location.

Mr. Al’s story is important, both for Louisiana live oaks and local communities who believe that preserving century-old oaks is important to local culture and history.  If people wish to save an important oak tree in their community, the first step is to get help from local groups and media. Start a petition; contact local and state politicians. Gather support from as many people as you can and let your local decision-makers know the importance of the tree to your town’s cultural identity. You can save that old tree.  (Much of this post comes from the recollections of Susan Edmunds combined with news articles on the move of the old oak.) .      – BG