A portion of Houmas House oak allée with six oaks.

In three previous posts, I’ve spotlighted the historic oak allées at Evergreen, Whitney, and Oak Alley Plantations, as well as St. Joseph allée at Manresa Retreat (the old Jefferson College) in Convent, LA.  I’d be remiss if I didn’t mention one more allee that still remains (in part) at Houmas House plantation, located on the east bank of the river in Darrow, LA, about a half-hour drive upriver from the Grammercy bridge. 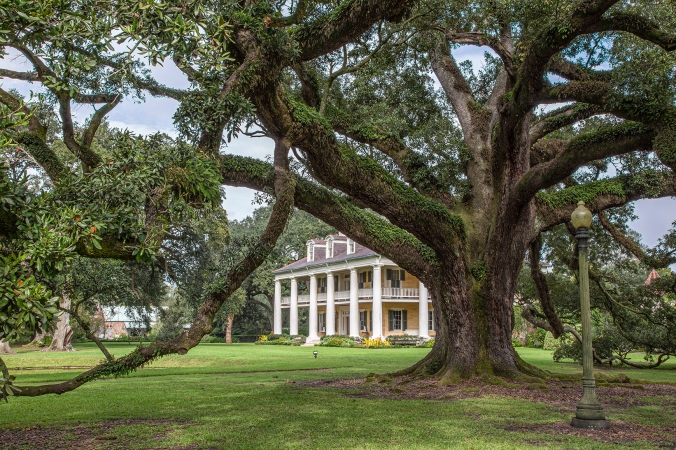 According to “64 Parishes,” the Louisiana Endowment for the Humanities’ publication and website, “Despite extensive investigation, the exact chronology and early building history of Houmas House remain unknown. What is documented is that it stands on land purchased in 1774 from the Houmas Indians. By 1809, a house existed on the site, perhaps built by William Donaldson and John W. Scott, who then owned the land.” General Wade Hampton (1752–1835), from South Carolina, acquired the plantation in 1811 and in 1840, Hampton’s daughter Caroline and her husband, John Smith Preston, built the current two-and-a-half-story Greek Revival manor.

Houmas House oak allée, view from #2 set of oaks from the main house toward the levee

The surviving oak allée consists of eight oaks. They are all of what remains from a much longer allée that once existed but was destroyed to create a setback of the Mississippi River levee.

In 2003, New Orleans businessman and preservationist Kevin Kelly purchased the home and the entire contents of the mansion and began restoring the mansion and grounds. According to the Houmas House website, Kelly chose to select the best features from various periods of the property’s history to showcase a legacy of each family who lived in the mansion. Check the Houmas House Plantation website for information on tours.