Oaks with 30-something feet girth
In 2015, I marked 30 years that of photographing live oaks of Louisiana and 10 years since I began the 100 Oaks Project (documenting the 100 oldest oaks in Louisiana). Because of these milestones, I decided to devote 2015 to tracking down the very oldest living live oaks in Louisiana—those trees with girths of 30 feet or more. I was already familiar with a few of the more well-known oaks in this size range, but most were still on my longer list of “trees yet to find.”

To compile my list, I included all Society member trees with a circumference of 26’ feet or greater when registered. I knew from experience and from discussions with arborists that mature oaks have an average growth rate of 1” to 1.5” per year. In a half-century, a healthy live oak can easily grow three to four feet in circumference. This narrowed my search to fewer than 30 oaks in Louisiana that could potentially be in the 30-foot girth range.

Before America was America—According to several Louisiana arborists I consulted, oaks of this size are probably between 400 and 500 years of age (add another 100 years or more to this estimate for those oaks with a girth greater than 35 feet). That means these live oaks were likely growing before Europeans settled this continent (the earliest colony was established in 1565 by the Spanish in St. Augustine, Florida; Jamestown, Virginia, was established in 1607). Some were quite possibly growing before the name “America” was first used in print in 1507 as a designation for this continent—in other words, Before America was America.

The 30-something club—One New Orleans arborist I contacted about a tree’s location jokingly suggested I call my list the “30-something club.” So, I’ve incorporated that into the title of this blog entry as well and have included in this list oaks that are almost 30 feet in girth (29′-6″ or greater). To me, these venerable oaks should be recognized as cultural and historical landmarks and deserve a more significant place in public awareness—and even some minimal protection that would allow them to live to whatever ripe old age a live oak can live.

Live oak protection—Tragically, several of the oldest oaks on the Society’s registry have died, fallen off the grid of public awareness or even been removed. It’s important to note that it’s only through public awareness and human interest that a tree’s survival is secured. Currently, there are no state laws in Louisiana to protect historic or heritage trees and only spotty local ordinances that offer any protection from human removal.  I’ll cover this in detail in a future blog entry.

In the next few blog entries, I’ll be documenting my search during 2015 to find these 30-something live oaks. Here are the trees in order of size:

As I continue locating and measuring additional oaks through this year, I may expand this 30-something list, but as of September, these are the oaks I’ve personally measured and confirmed to be 29′-6″ or larger.

NOTE:  I’ve found a few oaks with girths stated to be larger than 29 feet on the Live Oak Society registry. However, when I measured them, their sizes were smaller. I suspect they were simply mismeasured. Those oaks are not on this list but will be mentioned in my blog entries that follow because they are still very old trees and fit into my larger 100 oldest oaks list.

A bit of background—For those readers who are new to this blog, my wife Cyndi and I  began the 100 Oaks Project after Hurricanes Katrina and Rita swept across Louisiana in 2005.  We started with the 43 original inductee trees listed by Dr. Edwin L. Stephens in a 1934 article he wrote for the Louisiana Conservation Review titled “In Louisiana, I saw a Live Oak Growing” (a PDF copy of that article is contained in the “Pages” section of this blog).

Dr. Stephen’s original intent was to establish an organization “to promote the culture, distribution, and appreciation of the live oak.” Members were originally limited to oaks that were at least 100 years of age, determined by a circumference of 17 feet or more, though he revised these requirements to allow registration of “junior-league” oaks with a minimum circumference of eight feet. 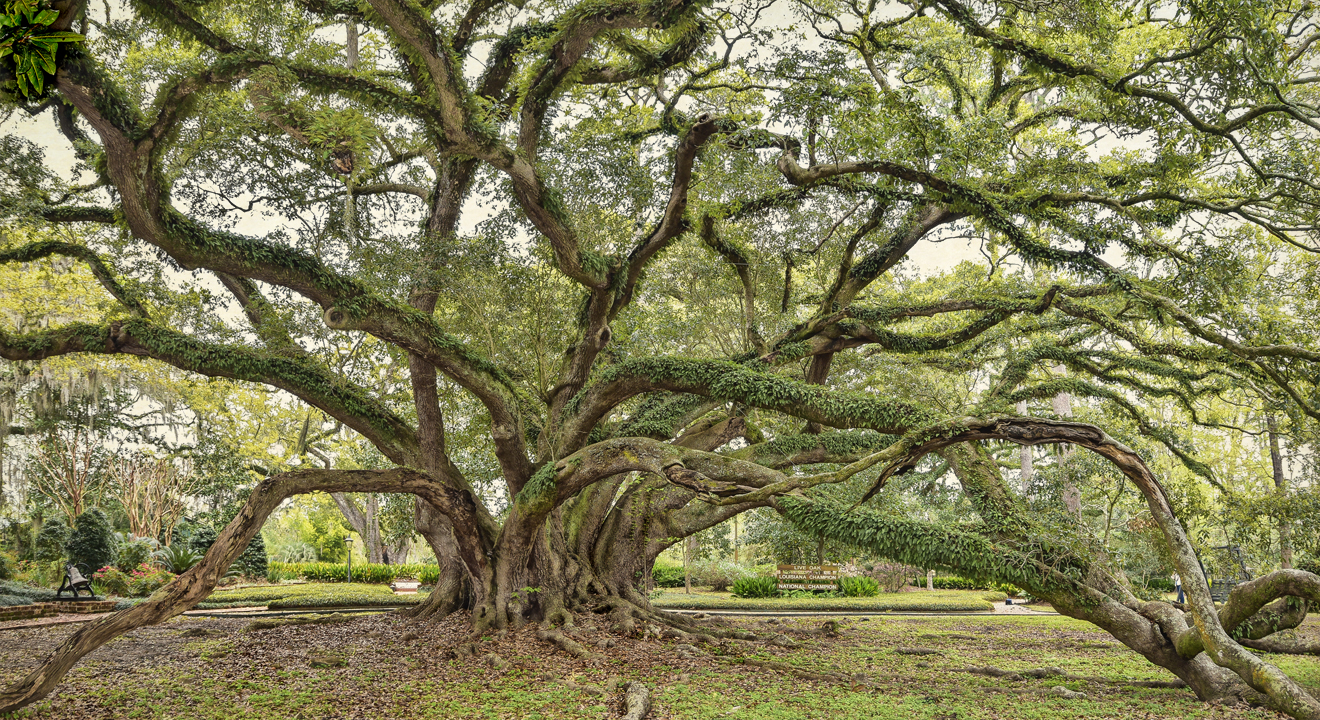 The Seven Sisters Oak resides in Lewisburg, LA (a small neighborhood community in Mandeville) at a private residence.  The historic and beautiful live oak is the President of the Live Oak Society, a unique organization whose members are all trees, with the exception of the Secretary or Chairman (currently is Coleen Perilloux Landry), who registers live oaks that are submitted for new membership and maintains the 75-year-old roster.  The Seven Sisters Oak was elected in 1968 after the first President died (The Locke Breaux Oak), and is the current President and largest tree in the Society.

Registration & Measurements:  Originally registered as Doby’s Seven Sisters (#200), the live oak’s first sponsors were the Doby family, who then owned the property.  The name was changed and the tree re-registered as the Seven Sisters Oak (#697).  When the live oak was first registered as Doby’s Seven Sisters, the girth was recorded at 36 feet, 1 inch.  It is an enormous tree, measuring approximately 55 feet high, with a limb spread of more than 130 feet.  In 1986, its circumference was measured at 37 feet, 6 inches; in 2003, the circumference was recorded at 38 feet; and a more recent measurement placed the girth at 39 feet 11 inches.  This magnificent tree is a worthy successor to the Locke Breaux Oak, the first President of the Live Oak Society, which died in 1966-68 due to air and groundwater pollution along the Mississippi River. To view vintage photographs of the Locke Breaux Oak go to the blog post “Revisiting the Lock Breaux Oak.”

Titles:  For years, the eligibility of the Seven Sisters Oak as a Live Oak Society member and the principal officer was disputed because it was believed to be several separate trees growing together.  In 1976, after inspection by federal foresters, the tree was proved to have a single root system; and its status as President was accepted without further contest, by virtue of its girth (the greatest measurement of all live oaks then registered with the Society). The confirmation of the single trunk system also granted the Seven Sisters Oak the undisputed title of National Champion Live Oak in the American Forestry Association’s National Register of Big Trees.

History:  The origin of the name, Seven Sisters, is lost in the obscurity of time and memory.  One current story is that the name describes seven main trunks that comprise the single tree.  Yet, the oak actually has more than seven trunks that split from its immense base in two clusters.  Another speculation is that the name is a translation of an older Choctaw Indian name that’s now forgotten.  The Choctaws were residents of this area for many years before white men arrived and a tree of this size would possibly have been well known and named by them.

Many Choctaws of the Lewisburg/Mandeville area were converted to Christianity by Father Adrein-Emmanuel Rouquette who preached the Christian gospel to the Indians under the limbs of live oaks, quite probably under this tree.  Father Rouquette was a French Creole from New Orleans, educated in Kentucky and Paris, France.  He so loved the woods near his childhood home along Bayou St. John in New Orleans that after completing his formal education, he returned not to New Orleans, but to the north shore of Lake Pontchartrain and the company of the trees.  There, preaching under the oaks, he felt more plainly God’s touch on the land and saw more clearly the light of His gospel reflected in the eyes and hearts of his congregation.

Sept. 2010 update:  According to Ms. Coleen Perilloux Landry, the Live Oak Society records reflect that “The Seven Sisters Oak was given its name because the owner at the time was one of seven sisters. It was Mrs. Doby who gave the oak its current name. When the tree was designated President of the Live Oak Society, the governor of Louisiana was present at the special event. The Marine Band played and a ballet troupe danced around its roots. Wooden doubloons with the tree’s name imprinted on it were given to everyone present.”

The Locke Breaux Oak in Taft, Louisiana, was the first President and a founding member of the Live Oak Society, a unique organization whose members are all live oaks (Quercus virginiana).  The society operates under the auspices of the Louisiana Garden Club Federation, Inc. today; and the tree association includes only one human, the acting Secretary (currently Coleen Perilloux Landry, “Chairman”), who maintains the roster of past, present, and future tree members, as they are registered.

The Locke Breaux Oak was a beautiful giant, named after the Locke and Breaux families, descendents of English philosopher, John Locke.  Dr. Edwin Lewis Stephens, founder of the Live Oak Society, in an article in the Louisiana Conservation Review (April 1934), begins his list of 43 live oaks proposed for membership in a tree “Association” with a description of the Locke Breaux Oak:

“First on the list, and most outstanding timber of the highest rank in the Association, is the Locke Breaux Live Oak, on the right bank of the Mississippi River, four miles above Hahnville in St. Charles Parish…This is the largest live oak I ever saw.  Its girth four feet above the ground is 35 feet; its height about 75 feet; its spread 166 feet, when I measured it on January 22, 1932, in company with my friend, its owner, the late Samuel Locke Breaux of New Orleans.”

The age of the Locke Breaux Oak has been estimated by various sources.  Ethelyn G. Orso’s Louisiana Live Oak Lore (published by  The Center for Louisiana Studies, University of Southwestern Louisiana, Lafayette, Louisiana) indicates that:

“According to legend, in 1682 LaSalle and his band of explorers knelt beneath it to give thanks for their safe journey down the Mississippi River.  The Locke Breaux Oak was estimated to be between 300 and 400 years old.”

A description of the Locke Breaux Oak is also found on the reverse of a postcard printed with a color image of the tree (photo by Hubert A. Lowman), which we purchased, with many thanks, from Billy’s Postcards).

Postcard of the Locke Breaux Oak - description on reverse

Beneath the bold title, the postcard states,

“This magnificent tree, the oldest live oak known, sprouted in 1657.”

and further describes the setting:

“A convenient road circles the tree and picnic facilities are provided by the Colonial Dairy, on whose property it grows.”

The Locke Breaux Oak is now deceased, its demise 1966-1968 due to air and ground water pollution, testimony to the need for more rigorous means of protection for other oaks of environmental, cultural, historic and aesthetic significance.  The live oak’s original sponsor, Colonial Dairy Farm, was sold to a chemical company, one of many that began to flourish in the parish after the discovery of oil within the region, which resulted in a shift from agriculture to industry.  The former Live Oak Society president remains #1 in the roster; and its impact on the landscape and contribution to history are known today, by those who were never privileged to view it in person, thanks to the individuals and organizations that recognized its grandeur and significance, and paused to record it, as well as to preserve the records.