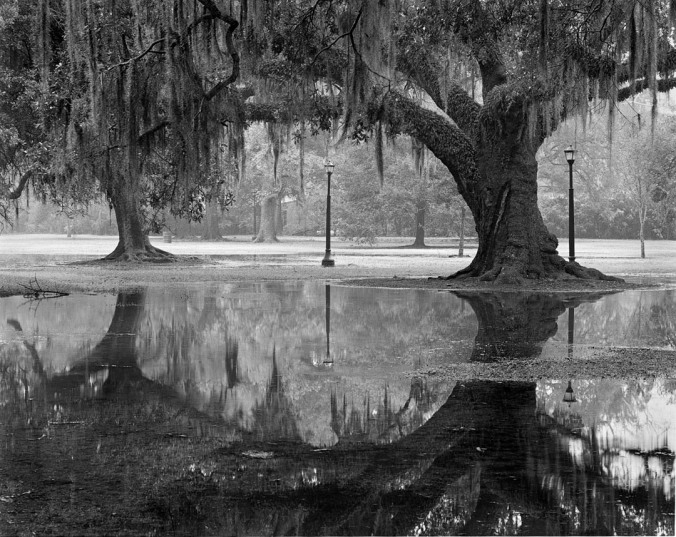 In general, live oaks have a high tolerance to storms and floods. But I’ve received questions from several friends concerned about how the recent flooding in Louisiana might affect their live oaks. Most centenarian (100 years +) live oaks in Louisiana have weathered multiple storms in its lifetime. The Seven Sisters Oak in Mandeville, being the oldest live oak in the South, has probably weathered hundreds of storms and several floods.I asked several arborists/ horticulturists who I know and whose opinions I respect to provide some answers about the effects of flooding on live oaks.  Here’s what they had to say:

Carefully watch the oaks: Arborist Jim Foret (The Tree Guy) from St. Martinville, teaches at ULL and has years of experience with old live oaks in the Acadiana area. He says that short-term flooding, as we’ve experienced recently, is likely to have little effect on healthy live oaks. Jim advises to watch your trees closely after the floodwater subsides to see if they begin dropping leaves, which could be an indication of root damage. If there’s indication of root damage, the tree may require mulch and a microbial boost (mycorrhiza). He believes in this case that the oaks can pretty much take care of themselves with minimum help from human caregivers.

Help the roots dry: An article by Dan Gill, the Times Picayune garden columnist and LSU AgCenter horticulturist says to “remove all mulches to allow the soil to dry out more rapidly. Then replace them. (read the full article below)

Speaking of mulch: Church Point arborist Bob Thibodaux (Bob’s Tree Preservation) who has worked with oak live oaks for decades believes that live oaks prefer mulch made from other live oaks. He manufactures and uses an “eco-mulch” made from local vegetation composed mostly of live oak compost and recommends it over other types of mulches.

Bruce Verdun, another arborist from Gray (Organicure) who is especially interested in the care and maintenance of old oaks, says that ideally you should have a skilled arborist look at and evaluate the impact of flood waters fairly soon after a flood. Each tree is different he emphasizes, and each needs to be examined and evaluated individually.

Pollutants in the waters? One serious problem with flooding is contaminants in the water that might stay in the soil and slowly affect the health of the tree.  A soil sample can help determine the amount of pollution and what needs to be done to rebalance soil post-flood. Contact your local LSU agent or an arborist to have a soil sample evaluation.

Allen Owings from the LSU Ag Center in Hammond (where they had floods) passed along an article by Dan Gill published right after the flooding. I’ll quote it in its entirely.

08/16/16) BATON ROUGE, La. – Root damage through drowning or root rot is the greatest danger to landscape plants caused by flooding. And even if a property didn’t have standing water, it likely has been saturated. And the longer the soil stays saturated, the more damage occurs.

Plant roots get the oxygen they need from air spaces in the soil, said LSU AgCenter horticulturist Dan Gill. When these spaces are filled with water, roots are deprived of the oxygen and may drown. “Initially, the roots stop functioning properly,” Gill said. “When the bright sun comes out, it’s not unusual for plants to wilt because the roots quit absorbing water.”

If floodwaters remain for several days, shrubs and herbaceous plants may be extensively damaged or killed. “Carefully assess shrubs that may appear dead,” Gill said. Scrape the bark in several areas. Green tissue under the bark indicates the shrubs are still alive and may recover.

Don’t be too hasty in removing landscape plants. Some plants that appear dead may begin to send out new growth a few weeks after the water recedes, Gill said. But shrubs that show no green tissue below the bark are likely dead. Floodwaters carry silt and debris that may be deposited on lawns as well as low-growing plants, such as shrubs, ground covers, annuals and perennials. It’s important to remove the debris as soon as possible, using a rake to remove most of the larger material and then a hose to wash off the remainder.

Also remove all mulches to allow the soil to dry out more rapidly. Then replace them. Even if fruit and vegetable plants are still alive, do not consume any fruits, vegetables or herbs that were or could have been touched by flood waters, Gill said. Remove and discard any produce.

You may, however, eat any fruit from trees, shrubs and vines in the future. And you may also generally eat the new growth of herbs and vegetables produced after the floodwaters recede. If a lawn is damaged or killed, a new lawn can be established or an existing lawn can be repaired using sod, plugs or seed.